#InformedImages: "Carnival of Souls" and "Insidious" 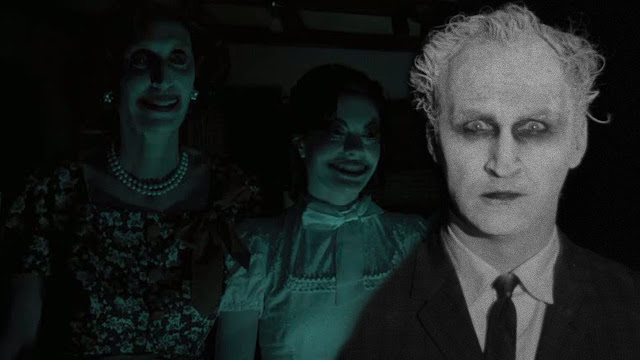 When director James Wan and screenwriter Leigh Whannell's Insidious hit theatres back in 2010, it became an instant hit and pop cultural fixture because it brought the horror genre back to its roots of getting under your skin through unnerving imagery, coupled with its idea of an afterlife/alternative reality known as "The Further" (which is no doubt one of the inspirations behind "The Upside Down" in the Netflix show Stranger Things). Unlike Wan and Whannell's previous collaboration Saw, Insidious wasn't reliant on shock or torture porn; instead it played like an updated version of The Exorcist (demonic forces possessing a child, for example) and one that knew how to spook audiences with the perfect mix of old school (e.g. classical violins in the score) and new school movie wizardry (e.g. updated special effects for its demonic entity).

The fourth film in the Insidious franchise (Insidious: The Last Key) hits theatres this weekend and while the sequels and prequels have offered more ghastly and monster-like entities to Wan and Whannell's universe, I wanted to take the opportunity to highlight a certain influential film that has its DNA in the ghoulish people we see in the original Insidious. That film is Herk Harvey's 1962 independent horror gem Carnival of Souls. In Carnival, Candace Hilligoss is stalked by these ghouls repeatedly and they have a specific look: their faces pasty white, with serious dark circles under their eyes and they lurk around in limbo, between our world and the afterlife. In the original Insidious, when Patrick Wilson's character goes into "The Further" to rescue his son, he comes across a lot of similar looking ghoulish entities, all fluctuating between static expressions and sudden rage. While the plots of Insidious and Carnival of Souls differs quite substantially, their shared connection of lost souls and how those souls are represented remains very strong and striking.

Watch my video below to see how the images from both films compare and be sure to share it with the hashtag #InformedImages on your social media pages.