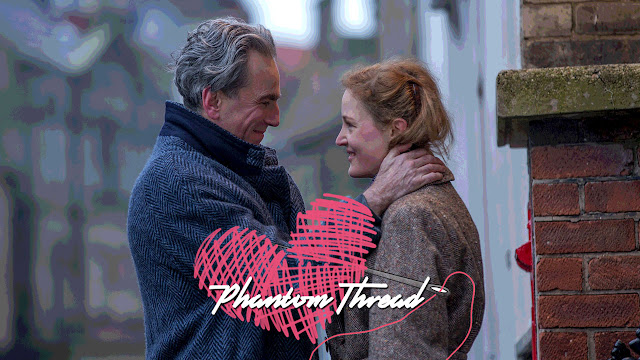 Paul Thomas Anderson's Phantom Thread has transformed into the damnedest of a work. While I found much to admire in it, I don't consider it to be a bonafide masterpiece. And yet, I find myself drawn back to certain elements that it celebrates, like the cinematic influences it wears on its sleeve (shit, is that a pun?). Maybe I revisit Phantom Thread in my head time and time again because I'm trying to make it something else?

Regardless, I got this idea stuck in my brain this morning while making coffee on how I would sell what the movie really is -- a dark romantic comedy -- to a mainstream audience in the 1980s. You know, where you didn't have the luxury of clicking "disc menu" on your Blu-ray remote and had to either hit fast forward on your VCR or actually watch the coming attractions. Then I got the twisted idea of making the movie look like the kind of rom-com Julia Roberts might even have starred in back in the day.

So here it is, with VHS auto-tracking and all. Watch Daniel Day-Lewis sweep Vicky Krieps off her feet!