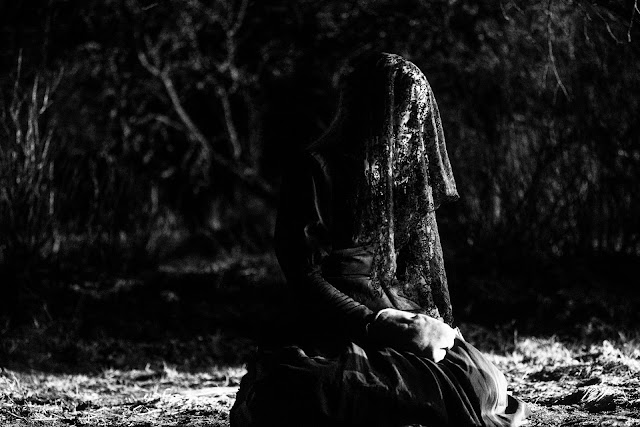 The protagonist of Estonian filmmaker Rainer Sarnet's Where Souls Go (from 2007), a fifteen-year-old girl named Ann, sets the plot in motion when she visits a satanist's website and says a prayer (in an effort to seek solutions) that inadvertently gives her newborn stepbrother a heart disease. Ann also has a poster for The Lord of the Rings: The Return of the King on her bedroom wall, prominent in many shots of the film. This image is a strong representation of Sarnet's interests: to acknowledge how fantasy (with its mythical creatures and wish-granting powers) shares an overlap with hell (and its evil incarnates). Considering this, it's no wonder that Sarnet chose to adapt Andrus Kivirähk's novel "Rehepapp," which focuses on 19th-century Estonian village peasants and the dead souls that lurk in the forest, for his latest film November.

How can I best describe November? Well, it's as if Michael Haneke's The White Ribbon was re-constructed by Salvador Dalí. November mixes surrealist imagery of animals (and crude makeshift figures) with ominous landscapes of the countryside (and its incongruous, poor villagers), all in stunning black-and-white photography by cinematographer Mart Taniel. Blood literally bleeds out of the pages of a book. Pale faced apparitions stroll at night. An eerie shot that pushes in on a forest tree reminded me of Roger Deakins' similar shot of a foreboding tree outside a home in Prisoners. In other words, the woods are no joke.

A majority of the plot stretches around a mild love triangle between the peasant Liina (Rea Lest), the not-so-bright Hans (Jörgen Liik) and the baroness (Jette Loona Hermanis). They all pay for their dances with the devil (both literally and figuratively) in dividends, but even this story pales against the grabbing and imposing photography. In fact, watching November, you're less inclined to care about the who is who because you're too busy asking yourself, "What the hell was that?" My favorite of these constructions are the kratts, which are animated figures made up of animal bones and machines parts that are inhabited by the spirits of slaves (or former farm workers?). I want to see a whole movie about them.

The good thing is that November is not all sorcery and spiritual hellfire. There's some absurdist humor too, like when a band of peasants tries to outwit a feared sickness by putting their pants on their heads. "The plague will think we have two asses and dare not touch us," one of them assures the group.

By the end, Sarnet tidies up as much of the subplots as he can, but I kind of wish he would've just gone in to a deeper void of madness. All of the film's production design, costumes and crazy ideas needed a cliff to jump off of, instead of resting on pathos.