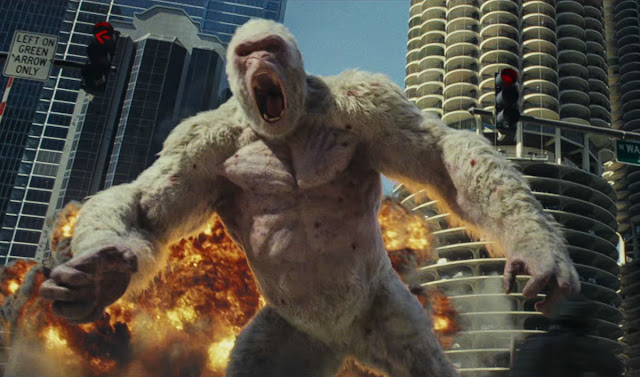 Chicago sure makes a gorgeous backdrop for sci-fi fare (Divergent, Jupiter Ascending) and big action spectacles from Hollywood (The Dark Knight, Transformers: Dark of the Moon), so it's no wonder that (arguably) the current biggest movie star in the world Dwayne Johnson has set his next sure-to-be blockbuster in the Windy City as well. Johnson's latest special effects extravaganza Rampage is based on the 1986 arcade game of the same name from Bally Midway. The game itself has gone through revamps over the years, appearing on platforms such as Atari and Sega Master System.

As I watched the first trailer for this live action adaptation, I marveled at how striking my beloved home city looked in several shots, but then I began to have a stasis of image association in my head. The flat 2D look of the original "Rampage" game struggled to surface in my conscience. So I did what I do best and I worked with the moving images in my latest video essay and rendered this new film (slated for a 2018 release) as that Bally Midway holy grail.