Happy Birthday to the late and great Harun Farocki 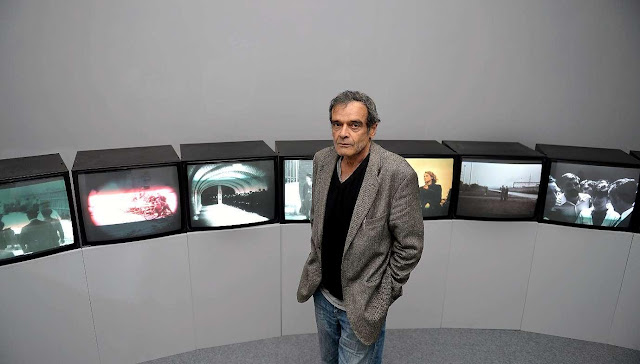 Today the titan video artist Harun Farocki would've been 74 years old. When Farocki passed away in 2014, it was a major loss in the moving image critical studies arena and in the world of digital new wave filmmaking. Farocki was not only a filmmaker, lecturer, thinker and documentarian, he was another embodiment what Chris Marker etched out when he began appropriating moving images and questioning what they really mean decades ago. In the years since, Marker's contemporary Jean Luc-Godard has managed to stay in a more public spotlight (most recently playing a diabolical role in the nonfiction film Faces Places) but Farocki has always been a figure who was more celebrated among his peers, students and in targeted circles of academia.

His side-by-side imagery of panels, screens and moving frames are an obvious influence on the many video essays on cinema that I've created over the last six or so years. Therefore, I wanted to celebrate Farocki by sharing one of his more recent efforts, a four-part video essays series on the world of video gaming called Parallel.

Here are a few words from Farocki on this series: "Computer animations are currently becoming a general model, surpassing film. In films, there is the wind that blows and the wind that is produced by a wind machine. Computer images do not have two kinds of wind."