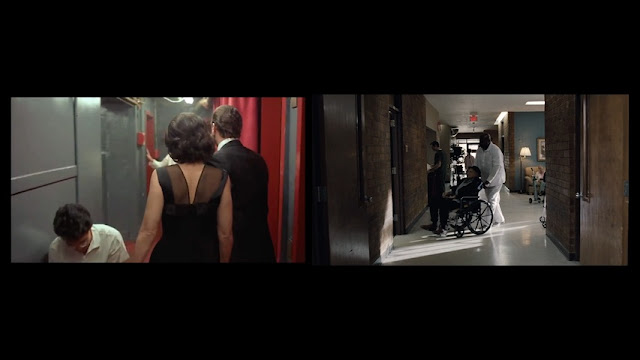 Martin Scorsese's new film The Irishman, which makes its streaming debut today on Netflix, is another landmark achievement from one of the world's greatest filmmakers. The film is also a reckoning for Mr. Scorsese.

The fact that The Irishman opens up with a long tracking shot (photographed by Rodrigo Prieto) is a deliberate nod to Scorsese's -- arguably -- most famous sequence: the long tracking shot into the Copacabana from Goodfellas (photographed by the late Michael Ballhaus). Nearly 30 years after that shot first dazzled audiences, Scorsese looks to be making an amendment to his visual thesis. Gone is the glory and glamour from the Goodfellas days. In The Irishman, melancholy oozes from the edges of the frame. Right out of the gate, we're introduced to the end of the road: a senior home where mob hitman Frank Sheeran (Robert De Niro) sits alone, awaiting his meaningless death.

When this shot is juxtaposed against the Goodfellas shot showing Henry Hill (Ray Liotta) taking his date Karen (Lorraine Bracco) through the side entrance of the club -- cutting through hallways and a busy kitchen and ultimately wowing her with his insider access and presence in this specific world -- we're seeing the beginning and end of an idea, of a career-spanning genre...of a lifetime even.

This is why I decided to show both tracking shots in two different contexts. The first section is scored by The Crystals' "Then He Kissed Me" (from Goodfellas) and the second section is scored by The Five Satins' "In The Still Of The Night" (from The Irishman). Watching it the first way, there's jubilance and promise. Watching it the second way, there's...well, you be the judge.