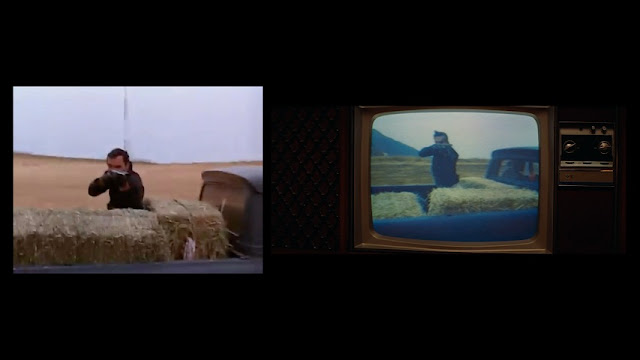 Something I tend to do at some point in the evening, whether or not drinks are involved, is to make anyone who is visiting my apartment sit down and watch something I love or find compelling or just want to share because I think it's the most special thing. It could be a whole movie or a short film or a music video. Maybe it's an SNL digital short. Sometimes it could be a video essay I just cut and want some feedback on. The through line is always the same: it's the moving image that I always go back to, wanting to relish in experiencing it with other people.

In the months since first watching Quentin Tarantino's Once Upon A Time...In Hollywood, his slow-burning cinematic love letter to Tinseltown in 1968, it's become fact that this movie serves the same purpose for Mr. Tarantino. It's not just a glorious "hangout movie" -- it's a glorious "hangout movie about watching movies -- and TV and commercials and even just listening to the radio." It's a motion picture that swears by Tarantino's most affectionate pieces of pop culture nostalgia from his youth. This is as close to being invited to Tarantino's home and rummaging through his media collection as most viewers will ever get.

And Tarantino's attention to detail is immaculate. Consider this video essay I just cut. It shows a side-by-side comparison between the original episode of The F.B.I. (which actually aired in November of 1965 -- not in 1968) starring Burt Reynolds and Once Upon A Time's recreation (with Leonardo DiCaprio in place of Reynolds). There's something extra special about watching the original episode and then hearing Tarantino's screen characters laugh on the soundtrack. It's like two different eras of moving images speaking to one other. The ultimate hangout.