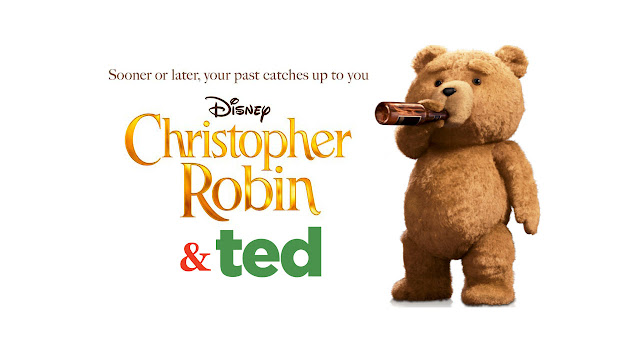 "Sooner or later, your past catches up to you." That's the tagline Disney is going with for their live-action Winnie the Pooh movie Christopher Robin, starring Ewan McGregor. While watching the teaser trailer (which debuted today) and getting my first look at a real life Winnie the Pooh talking bear, I couldn't help but be reminded of Seth MacFarlane's Ted, the R-rated comedy which featured a protagonist who's a foul-mouthed talking teddy bear. Ironically enough, MacFarlane's talking bear Ted has a much more cuddly and lovable look to him. Disney decided to give Winnie the Pooh a crude and homely-looking appearance -- not exactly what you'd expect for their intended child audience. So I decided to create this mashup trailer, which rewrites Christopher Robin's (McGregor) backstory to suggest that Ted was his original bear and he just sewed up the teddy bear's parts to look like Winnie the Pooh.

Talk about your past catching up to you! Watch my mashup trailer below...