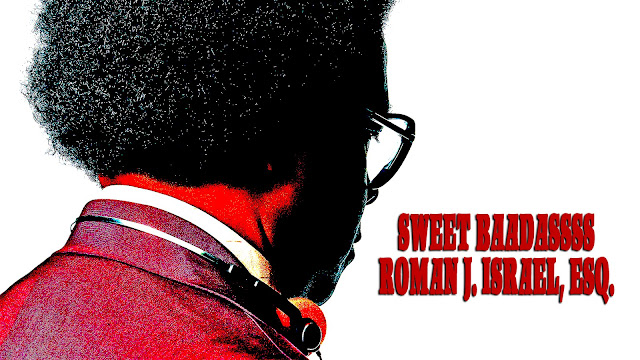 Roman told the story (I guess) of an idealistic lawyer (Washington) who gets in over his head once he takes over a hostile criminal case from his late mentor and boss...but already I'm making the film sound much more interesting and exciting than it really is. Colin Farrell co-stars as a hot shot attorney and marginal friend to our protagonist but he's underused in the role. As I reflected on the dud that this movie is, not the mention how it unbelievably scored Washington a Best Actor Oscar nomination, I started to wonder how the film would've looked like as a subgenre motion picture.

I then came across the trailer for Melvin Van Peebles' Blaxploitation classic Sweet Sweetback's Baadasssss Song from 1971. Van Peebles' film was a milestone in its genre at the time (with jump-cuts that pulsated to a score by Earth, Wind & Fire) and it became required viewing for the Black Panthers. I thought Gilroy's film could use some of Sweet's energy and tenacity, so I went ahead and created Sweet Baadassss Roman J. Israel, Esq. for your viewing pleasure. Also, because Denzel deserves better.