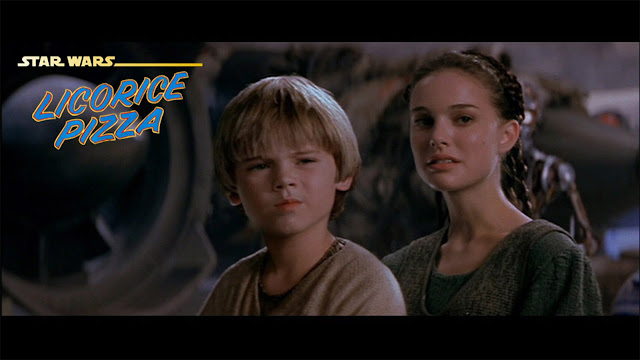 If we were living in the the movie Minority Report, Paul Thomas Anderson's latest film Licorice Pizza would get arrested for "Precrime." At least in the court of (some) public opinion. Anderson's film -- which I think is pretty great -- has come under criticism for the age gap between its two lead characters (15-year-old Gary and mid-20-something Alana), who go back and forth between friendship and playing flirtatious footsie. At no point in Licorice Pizza do they do anything sexual. Their feelings are sincere and the physical attraction is sometimes there, but it's all never acted on. Does that make the movie immoral? I don't think so. Could Gary and Alana some day end up together? I could see that. And Gary would (presumably) be of age by that point.
This age gap controversy had me thinking about a similar scenario...in George Lucas' Star Wars: Episode 1 - The Phantom Menace. In the Star Wars films, we know that Queen Padmé Amidala will eventually fall in love with and marry Anakin Skywalker (Darth Vader). So in The Phantom Menace, when they meet for the first time, the age gap is glaring: Anakin is very much a child and Padmé is an adult. No sexual line is ever crossed. Yet because it is a prequel and we know their eventual romantic fate, the age gap is very underlined. But does that make the movie immoral? I don't think so either.