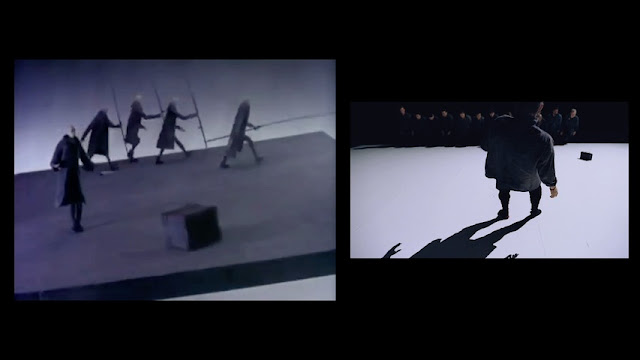 Paul Thomas Anderson shocked a lot of cinephiles last week when he dropped a new musical short film -- Anima -- on Netflix. Anima is a creative collaboration with Radiohead frontman Thom Yorke; it immediately drew comparisons to Buster Keaton from several film writers. The Keaton comparison is fine and all but it is kind of a lazy summation in my opinion. To me, PTA's Punch-Drunk Love was more of a Buster Keaton homage if anything (just look at the sequence where Adam Sandler runs from the Four Blonde Brothers outside of a 99¢ Only Store).

I feel that Anima comes from a perfect storm of pretty random inspirations. Among them, some Bergman (Persona) and McQueen (Shame). The centerpiece of Anima, I believe, is a direct offspring of the 1989 Oscar-winning animated short film Balance. This extended sequence has Yorke and several other men in dark clothing try to retain their balance on a constantly shifting platform that hangs in a dark void.

Take a look at my latest #InformedImages video essay and see for yourself.