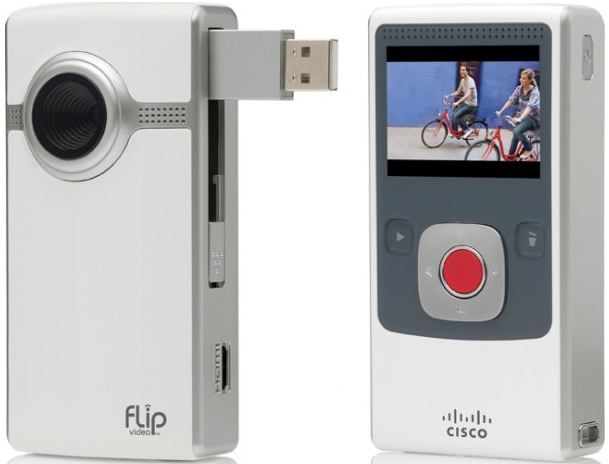 Back in April it was announced that Cisco was planning to shut down its video department--in other words, the Flip Video Camera. While it came as a shock to most people, it pays to remember that technology these days changes quicker than an infant's diaper. It doesn't mean that the Flip Cam is obsolete; Cisco is just off to new ventures. What I always liked about the Flip Cams--and what I still do like about them--are their tremendous reach. Not reach in depth of field but in how easily they can be toted around and pulled out in a blink's notice. These are the REAL instruments of guerrilla and indie filmmaking. Fuck the setup--just point and shoot.

Now that Cisco has stamped an "RIP" on these cameras, I feel that they will grow to be treasured tools for true indie auteurs. In the same way that certain "film" cameras resurfaced for experimental filmmakers, Flip Cams will be Thor's hammer for digital filmmakers. And with no more of them being produced, you can bet they will be in demand.

But what about the stories being told with Flip Cams? They're still as viable as anything being shot on 35mm. Like I always scream about: It's about content and NOT fancy cameras/expensive budgets! Consider filmmaker David Guy Levy's feature length film A Love Affair Of Sorts. It was shot entirely on Flip Cameras.

Los Angeles Times: "The 30-year-old Silver Lake resident made A Love Affair Of Sorts with just two $300 Flip camcorders, an actor he barely knows and a budget of $1,600. He's not just showing it in his living room, though: The movie, apparently the first Flip Cam movie to get a U.S. theatrical release, will open Friday in cinemas in L.A. and New York.

"A lot of people might question why I'm making the first Flip Cam movie," Levy said at his home, where half of A Love Affair Of Sorts was shot. "They might say, 'Why did you do that? Why not a big movie with a big story?' Well, I'm not trying to make Avatar."

The fact that a Flip is only a few inches tall helped create an intimacy that bigger, fancier cameras couldn't offer.
Awkward pauses, spasms of expressions and subtle drama are captured as the audience "secretly" watches from the coffee table or the bedside.

"With the Flip Cam, we can just put it down and two minutes later forget it was even there," Levy said. "We would interact and realize that we've had the camera rolling.""

Now I'm not saying that your next project should be shot on a Flip Cam. But know that for the true independents--a useful filmmaking instrument is a useful instrument nonetheless. "Share your story--in whatever capacity you can!"