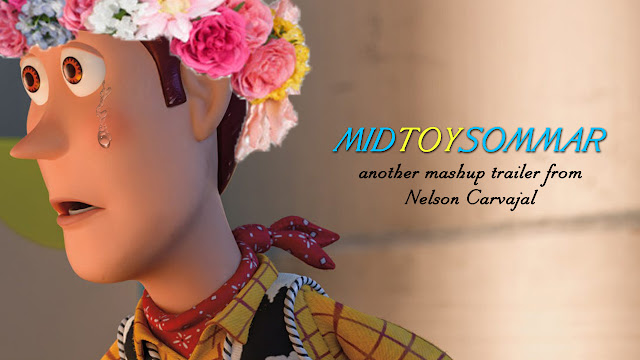 While watching Josh Cooley's Toy Story 4 -- perhaps the bleakest entry of the series (and that's not a bad thing) -- I remembered how insanely serious this Pixar flagship really is. I'm not kidding. Remember the theme of mortality during that incinerator scene in Toy Story 3? This is heavy stuff for the targeted children audience. Toy Story 4 is no different — but instead of death it looks closely at the next scariest thing: breaking up with someone. In a lot of ways, this is *the* Woody entry in the film series, giving him a complete, fully-focused arc. Woody is poised with the dilemma of having to break up with Bonnie, his kid owner. And the ending is surprising and moving.

Then, making a complete 180-degree turn is Ari Aster's upcoming "horror" film Midsommar. I haven't seen Midsommar yet...but I fully intend to, especially since I regard Aster's Hereditary as the best film of 2018. So, as many cinephiles can relate, I've been reading anything and everything about Midsommar in the days leading up to its nearing release date. It turns out, many of the Midsommar reviews reveal it to be a breakup film (much like my interpretation of Toy Story 4). Then I started to consider the festival backdrops for both films (a carnival in Toy Story 4 and a summer solstice fest in Midsommar) and before you know it this mashup happened.

Suffice it to say, I had a lot of fun putting this one together.