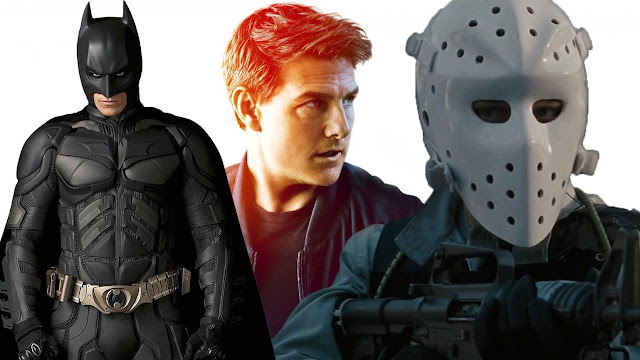 Christopher McQuarrie's Mission: Impossible - Fallout is a triumph for the M:I franchise. Not only is it a superior sequel in the series, it's the best of the films since the original M:I entry (directed by Brian De Palma). Watching Fallout in theatres this past summer was one of the most exciting screening experiences I've had in a very long time. Each action sequence delivers the thrills and each is exceptional in their own right (from an electric HALO jump sequence to a bloody bathroom brawl in a nightclub).

Since Fallout is an important achievement in the action film canon, it is just as important to understand why this film rises above most other action films. A big part of that achievement, of course, comes from the writing, directing, editing, music and the amazing conviction that Tom Cruise gives to his physical performance. Yet, another part of the film's success is that it taps into our memory of other exceptional action set pieces. Now, how much of these cinematic influences McQuarrie meant to wear on his sleeve is up for debate but you'd be foolish to not recognize some obvious visual inspirations.

For this newest installment of #InformedImages I show how Michael Mann's Heat, Christopher Nolan's The Dark Knight films and Renny Harlin's Cliffhanger are all in the DNA of McQuarrie's visual construct. That's not to say that McQuarrie is "copying" these films or even paying homage to them; rather, it's to show how that when we watch films -- and that includes when McQuarrie watches a film -- we file certain moving images in our brain and then they never go away. Nolan, for example, has repeatedly mentioned Heat when it came to his conceiving of The Dark Knight. Because that's what films do: they speak to each other.

Fallout is the latest to speak to its predecessors.