Review: "The Killing of a Sacred Deer" 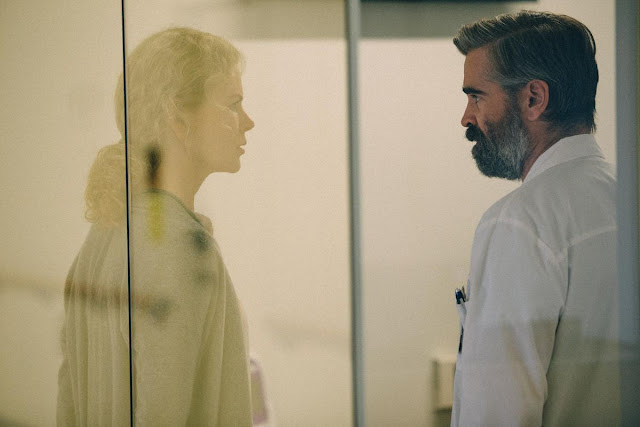 Yorgos Lanthimos must associate diners with closure and inner peace. The diner has been the setting for the final scenes in his two most recent outings a director, The Lobster and his newest film The Killing of Sacred Deer. Lobster told a bleak (and often painfully funny) postmodern fable about finding love, yet you could really feel that Lanthimos cared for his two protagonists (even though they both endured some life-changing sacrifices). On the other hand, I can't say that Lanthimos cares for anyone in Sacred Deer. But maybe that's the point.

Sacred Deer stars Colin Farrell and Nicole Kidman, as a textbook-happily-married-couple with two children (a young son and a teenage daughter) and a gorgeous mansion of a suburban home. Farrell's Steven Murphy is a doctor who spends a lot of his time at work, alongside his colleague Matthew (played by Bill Camp, who was superb in HBO's The Night Of) but even MORE time acting as a surrogate paternal figure for the off-putting Martin (Barry Keoghan), a teenage male who lurks around the hospital corridors. There is something incredibly suspicious about their relationship from the get-go as the audience wonders why Martin isn't at school or even at home during their initial encounters. Steven seems imprisoned to make small talk and offer shoulders-length concern to Martin at his every request.

Not too long after some domestic episodes paint the day-to-day of Steven's life (for example, he likes to fuck his wife Anna when she pretends to be under anesthesia), do the wheels of the plot turn. Steven's son Bob (Sunny Suljic) one day wakes up and says he can't feel or move his legs. Steven and Anna take Bob to the hospital thinking it's due to stress and emotional fatigue. But shortly after Bob's prognosis their daughter Kim (Raffey Cassidy) falls victim to the same illness and Martin comes to admit that he's the omniscient orchestrator to Steven's family's physical impairments.

Martin's motives and the severity of these impairments are best left for the audience to discover but I don't think that they hold up the final third of the film strongly enough. For much of the film Lanthimos is successful at churning the looming dread and uncertainty with Kubrickian gusto in both his visuals and emotional temperature. And even with allusions to the Greek myth Iphigenia, and its themes of God vs. man, I don't think that Sacred Deer packs the satisfying punch with its grave climax in ways that a film like Michael Haneke's Funny Games does. Haneke knows to be cold and distant to his characters but his characters know how to be relatable and convincing to the audience, so we actually are riveted by their demise. I got the feeling that the characters in Sacred Deer were all too well informed on their own fates (from a meta and not plot-level) to the point where they were just arbitrarily playing along, resulting in less emotional weight during the final stretch. Still, I wouldn't persuade viewers to not see Sacred Deer. It's a real striking piece of filmmaking and its errors are hardly the errors of a majority of forgettable films that come out on a weekly basis.